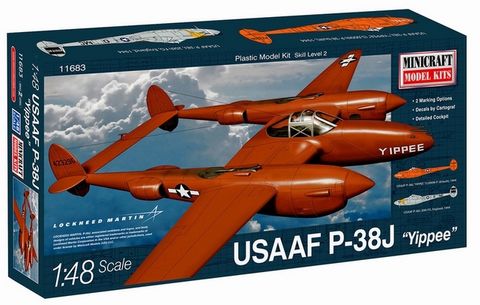 No. 11683 P-38J USAAF "YIPPEE" 1/48th
The P-38 was developed just before WWII for the United States Army Air Force that combined high-speed performance, heavy firepower and long range. The P-38 was used extensively in Europe and the Pacific. The P-38 holds the record as the aircraft flown by the highest scoring fighter ace of the United States in WWII. The new P-38J from Minicraft includes a new decal sheet printed by Cartograf featuring 2 new marking schemes:

USAAF Yippee was the 5,000th P-38 produced and painted the distinctive red-orange color in recognition of the achievement. Yippee was used to promote the sale of War Bonds to support the US war effort in World War II prior to being delivered to the USAAF for combat. The second marking scheme represents a USAAF P-38J which served in 20th Fighter Group based in England in 1944.