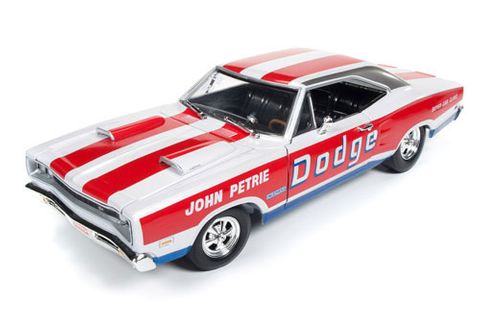 In 1969 well known Canadian drag racer John Petrie was approached by Chrysler to run their Canadian Performance Car clinic program from coast to coast. At 27 years of age, John had raced Mopars most of his early career and was the first Canadian to break the 11, 10, 9, 8 and 7 second quarter mile barriers in a stock car. Petrie was tapped to do both Dodge and Plymouth for all of Canada. Chrysler provided him with two factory hemi Mopars for the 1969 season, a hemi four speed Super Bee hardtop and a hemi automatic GTX convertible. The engines were built and supplied by the famed Ramchargers out of the US, and both cars were painted a pearl white base with candy red and candy blue accent stripes making them a very striking pair. This model replicates his famous SS/E 1969 hemi Super Bee as shown in Dodge and Plymouth dealerships and raced at regional drag strips across Canada in 1969.