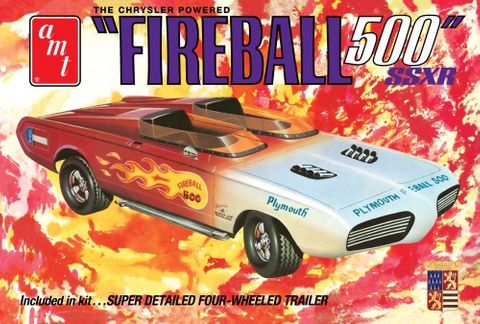 Build Barris’ Ball of Fire With AMT! …Only from the KATS at AMT! …Scale Modeling at its BEST!

George Barris is known around the world as the “King of the Kustoms.” He turned everyday cars into outright celebrities, featured in TV shows and on movie screens too! So naturally, George and his Barris Kustom crew were the ones who designed and built a high-powered, sleek-styled roadster, named after and featured in American International’s 1966 motion picture called :Fireball 500.” It starred three of the decade’s favorite young actors: Frankie Avalon, Annette Funicello and Fabian! Starting as a stock 1966 Plymouth Barracuda, one of the Fireball 500’s outstanding features was its dual-cowl cockpits, streamlined into twin curved windshields. Another very exciting feature of the Fireball 500 was the paintwork. A super high-luster paint finish that took seven men, six days and forty coats of hand-rubbed lacquer to get the wild multicolored blends from pearl white
to deep burgundy.

The Kats at AMT are proud to bring you this very special edition of George Barris’ vintage Fireball 500 kit!