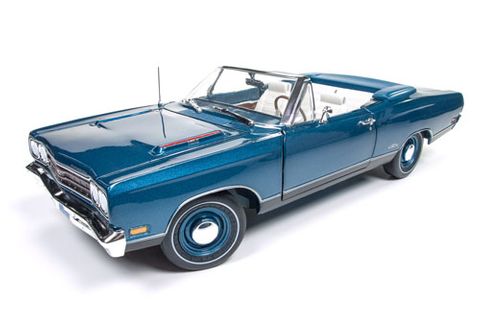 In 1967, Plymouth introduced the Belvedere GTX. It quickly earned a reputation for being the gentleman’s hot rod.” In 1969, The GTX had several upgrades. It was outfitted with a fresh grille and various cosmetic changes, but the most important upgrades were under the hood. The 426 HEMI® could be added for an additional $700.90, but only 198 hardtops and 11 GTX convertibles ever left the factory with this option. Only 5 were ever made with the 4-speed option, and just 2 are known to still exist. Plymouth also added the air grabber option with dash-controlled shutoff, as well as a Hurst shifter and a wider choice of rear axles. To commemorate the 50th anniversary of the Plymouth GTX, Auto World has replicated the rarest of the 1969 GTX convertibles: The super-sharp 426 HEMI® 4-speed. This Jamaican Blue Poly convertible features incredible factory details with white interior, dog-dish wheels, and Air Grabber hood. This show stopper is sure to be a highlight of any collection.