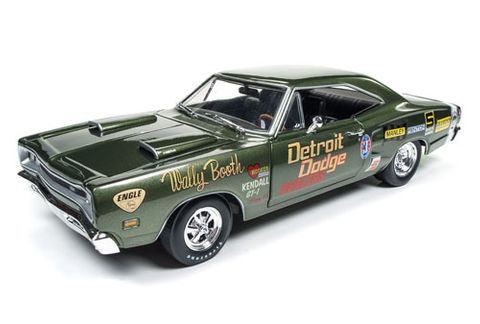 In 1969 Mr Rat Pack, “Wally Booth” sold his successful ‘68 Camaro racer and moved over to a factory sponsored Mopar for the 1969 season. Starting with a ‘69 Super Bee, the original 383 was replaced with a built up 426 HEMI engine to challenge in the NHRA’s SS/E class. Racing against the likes of Dick Landy and his ‘69 Charger, Booth would record a best time of 10.90 at the famed York US 30 dragstrip.

After the 1969 season, Wally Booth would buy back his Camaro and return to GM for a few years, before moving on to considerable success in a series of AMC drag cars. Auto World has captured this one year Mopar deal with an accurate replica of Wally Booth’s Super Bee super stocker. Sponsored by Detroit Dodge and carrying historically correct sponsorship decals, this NHRA Division 3 dragster model will look excellent displayed alongside Auto World’s 1969 Dick Landy Charger just as they raced back in the summer of ‘69.