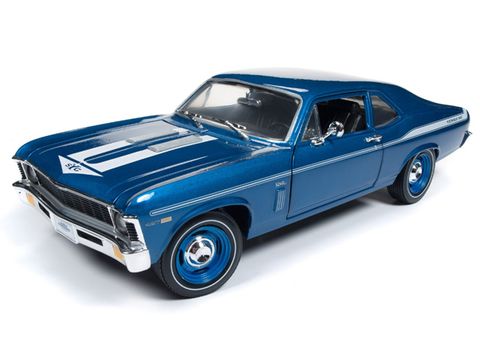 As a second-generation Chevrolet® dealer, Don Yenko was raised around cars. Style, performance, and trends in the car market were second nature to him. In 1957, he took over his father’s dealership in Canonsburg, Pennsylvania. In 1966, he began
building highly desirable, customized Chevrolet® muscle cars. Beginning with the Corvair®, he progressed into the Nova™, Camaro™, Chevelle™, and Vega™ muscle car market. He was building so many cars by 1969, he began utilizing
GM’s Central Office Production Order (COPO) system to order cars directly from GM with the desired L-72 427ci engines factory-installed. With limited production runs and exceedingly high performance, the Yenko® name became a brand in its own right, producing some of the most collectible and valuable Chevrolet® muscle cars from the era.

This Auto World die-cast is an exact 1:18 replica of a LeMans Blue 1969 Chevy® Nova Yenko masterpiece.