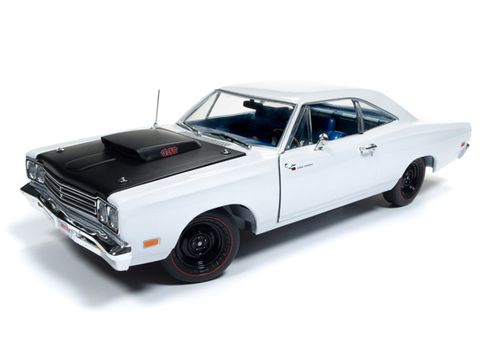 Bo Beaulier worked with his brother, Dalton, as a performance mechanic at Secord Chrysler-Plymouth in Meriden, Connecticut. In 1969, he had ordered a 1969 Plymouth Cuda 340 with plans of immediately swapping the stock engine for a 440 so he could drag race it. The car he ordered was stolen during transfer to the dealership! Instead, he test drove a white A12 6bbl Plymouth Road Runner off the dealership lot. He and his wife Barbara bought it brand new on May 18, 1969.

Shortly after, the Beaulier brothers tuned the new Plymouth Road Runner for a successful racing career running high 11s at more than 110mph. For years, Bo and Barbara took immaculate care of their Plymouth Road Runner both on and off the track, before finally selling it to Dalton’s son-in-law named Barbagallo in 2001. He still owns this rare car today.

The Plymouth brand made 1,412 A12- optioned cars using both the 2-door coupe and hardtop body styles. Of those, only two had white paint and a 4-speed. Only one of those had a blue bench seat interior.