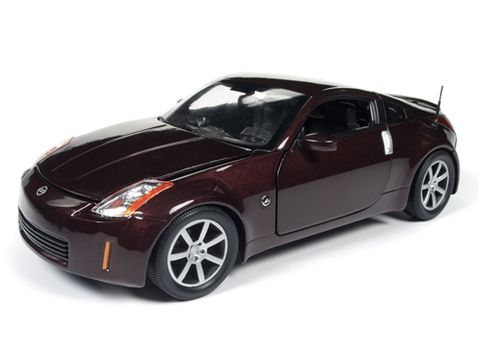 Nissan set out to create a sporty coupe to mark the 5th generation of their iconic Z-cars. In 2000, Ajay Panchal of Nissan Design America in San Diego, California designed the 350Z with inspiration from the 240Z concept car that received praise when shown at auto shows the previous year. The result was a timeless front-engine sport coupe still coveted by drifters, track racers, and import car enthusiasts today. It was so popular, it even landed a role in one of Hollywood’s largest movie franchises. Nissan sold nearly 37,000 in 2003 alone!

Auto World has faithfully replicated this modern classic in rich factory-match Brickyard Red metallic paint. Under the hood is the standard 3.5L V6 capable of 287hp.