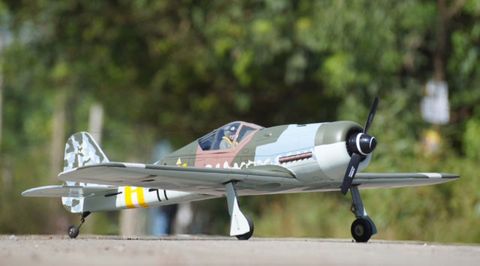 The Fw 190 is commonly considered Germany's best fi ghter aircraft of World War II. It was a rude shock to Allied forces when it first appeared in 1941 over the skies of France, as it immediately showed its superiority to any other plane of the time. The FW-190 brewed fear and intimidation in its foes with its extreme high performance. Its success shows in its numbers. Germany produced over 20,000 of these formidable fighters.

The VQ ARF’s FW-190 Wurger captures the beauty and grace of this WWII Icon in a 46 size warbird suitable for experienced R/C pilots. It’s jig-built laser cut parts go together like a glove making a strong airframe. And just like all VQ ARF’s you’ll only have to handle the final assembly as this airframe comes factory built and covered just as you’d expect from a modern ARF. Want added realism? Just add the aftermarket VQ retracts !