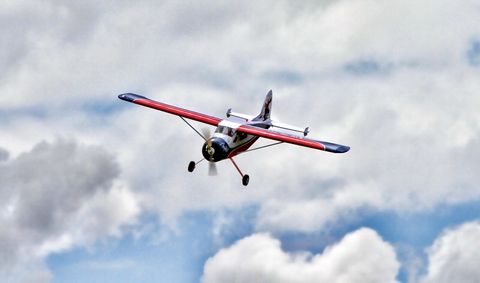 The de Havilland Canada DHC-2 Beaver is a single-engined, high-wing, propeller-driven, STOL aircraft developed by de Havilland Canada, primarily known as a bush plane. It is used for cargo and passenger hauling, aerial application (crop dusting and aerial topdressing), and has been widely adopted by armed forces as a utility aircraft. The United States Army purchased several hundred; nine DHC-2s are still in service with the U.S. Air Force Auxiliary (Civil Air Patrol) for search and rescue. A Royal New Zealand Air Force Beaver supported Sir Edmund Hillary's expedition to the South Pole. Over 1,600 Beavers were produced until 1967 when the original line shut down.

Due to its success, the Royal Canadian Mint commemorated the Beaver on a special edition Canadian quarter in November 1999.

VQ ARF’s has provided that fun in this perfectly sized model aircraft . The VQ ARF’s DHC-2 Beaver is fun to own it fly .

The DHC-2 Beaver is a high-wing , stable aircraft and this model is intended for intermediate to experienced modelers who have prior ARF experience and have soloed 4 channels aircraft . This mean anyone can fly a DHC-2 Beaver . And you will have it in the air quick because it’s an easy to assembly ARF model . It accepts standard equipment and will be ready to fly in a few short hours . Buy it today , fly it tomorrow . You can get it in the air quick.

We recognizes today’s R/C pilot wants to fly his aircraft with his favorite type power system . This model is designed to accept two stroke , four stroke , and electric power systems . Power it any way you want ! No hassles.