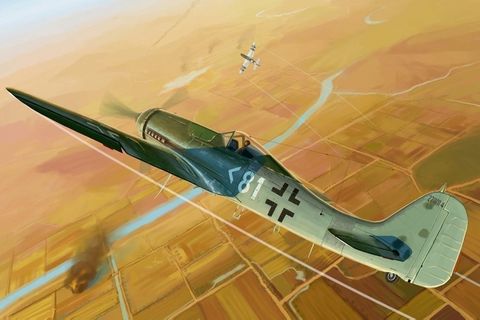 Because of the concerns of the new fighters of the enemy,the Germany Air Force put out a requirements of the new fighters.The design of the Dr.Kurt Tank finally became the Fw 190 which were regard as one of the best fighter during the WWII at the end of 1903s.The fantastic performance of the Fw 190 soon led the replacement of the Messerschmidt Bf-109.
The Fw 190D-11 was considered as the following type of the D-9.They were planned to be powered by the Jumo 213F engine and seven prototypes were built.The production Fw 190D-11 was to have no nose armament,and to have the new canopy as a standard.Because of the delays of the development of the engine,no aircraft were built before the end of the war.
Item No 81718
Item Name Focke Wulf FW 190D-11
Bar Code 6939319217189
Scale 1:48
Item Type Static kit
Model Dimension Length:213 mm Wingspan: 219mm Height: mm
Total Plastic Parts 120+
Total Sprues 10 sprues
Chromeplate Parts n/a
Resin Parts n/a
Metal Parts n/a
Photo Etched Parts 1 piece
Film Accessory n/a
Released Date 2013-11
More Features the kit consists of over 120 parts , includes 5 clear parts
-Detailed fuselage&wing w/accurate design
-Detailed gear cabin
-Photo etched parts included