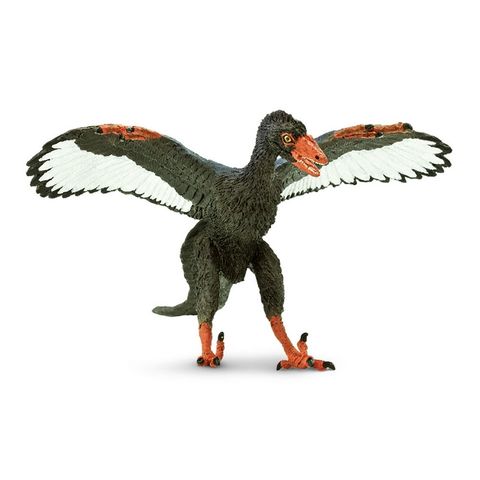 Archaeopteryx shook the scientific world when it was announced in 1861. This small crow-sized creature had large feathers but also retained primitive reptilian features including sharp teeth, hands, and a long bony tail. This ‘missing link’ between reptiles and birds helped to shape our understanding of dinosaur evolution. To this day, Archaeopteryx is still the most ancient fossil bird ever found, and one of the most famous fossils in the world. It lived in Germany during the late Jurassic, 150 million years ago.

The first Archaeopteryx skeleton was announced in 1861 after being excavated by quarrymen from the Solnhofen Limestone deposits of Bavaria, Germany. Earlier that year an isolated feather had been described from the same deposits under the name of Archaeopteryx, or ‘ancient feather’. It was clear that the partially articulated fossil skeleton, which was preserved in stunning detail with a fan of feathers spreading from its arms and tail, belonged to the same creature.

The skeleton was owned by a local doctor, Carl Häberlein, who sold it to the British Museum in 1862. It became known as the “London Specimen” and remains there to this day. The specimen was described by Richard Owen, the founder of the museum and creator of the word “dinosaur”, who noted the presence of a wish bone in Archaeopteryx suited for flight. Later scientists noted its unusual combination of bird and reptile characters.

The discovery of Archaeopteryx was timely. Charles Darwin had recently published his controversial book ‘On the Origin of Species’ in 1859, so a ‘missing link’ such as Archaeopteryx - an apparently transitional form between reptiles and birds – was a pivotal piece of evidence. Archaeopteryx, the so-called ‘first bird’, therefore helped evolutionary theory to gain widespread acceptance.

A second specimen of Archaeopteryx was discovered in 1876 that was even more spectacular than the first. This complete articulated specimen also had feathers preserved and is probably the most famous fossil ever found. It ended up in Berlin’s Museum für Naturkunde. Since then, eight or so more Archaeopteryx fossils have been discovered, but none are as complete or iconic as the amazing “Berlin Specimen”.

There is only one valid species, Archaeopteryx lithographica. It flew around the shallow lagoons of late Jurassic Germany, 150 million years ago, where it hunted for small prey.