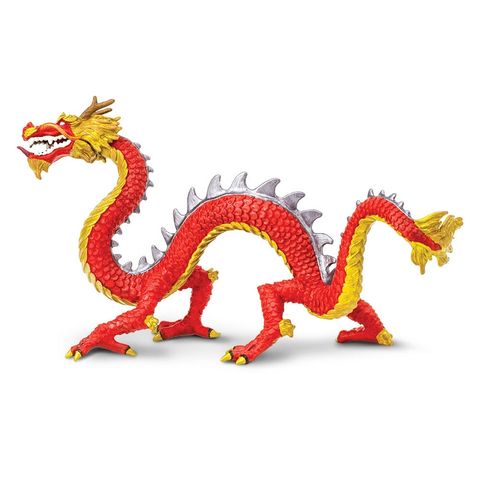 This figure depicts the classic long-necked, long-tailed snarling dragon so popular in European stories. Although wingless, it could doubtless spew fire to heat up any brave knights who might attempt to make heroes of themselves.

Dragons have a deep history stemming back to ancient China. Over 3000 years ago during the Shang Dynasty, it was worshipped as a supernatural power. During the 800-year Zhou Dynasty that followed, the dragon was somewhat supplanted by the phoenix, becoming an artistic symbol. At the peak of Greek culture, dragons were enjoying a resurgence in China, again becoming a symbol of benevolence and power. During the dynasties that followed, stretching over 400 years to the end of the Han Dynasty, dragons achieved the form known today, a long serpent-like body with sharp claws. Dragons also came to symbolize emperors, a place they held for centuries after.

Emperor of all China Qin Shi Huang set down his book, The Art of War, and pondered his growing empire. He rose from his chair, which he referred to as a dragon throne, and patted the long dragon embroidered on his robe. He now referred to himself exclusively as son of the dragon, and he intended to live up to the name. In the north, the foundations of a massive project were underway. Eventually it would run the entire northern border of his empire, repelling invaders and allowing his armies to travel quickly from place to place. Nearer, another project had begun. Artisans were creating an army of soldiers out of clay—a fitting force to accompany the dragon’s son to the afterlife, where he intended to continue his conquests. Over a thousand of the unique figures were complete already, placed in poses throughout the massive necropolis that would one day be his tomb. Suddenly, a light flashed across the sky, followed by a streak. A dragon, perhaps? Qin Shi Huang felt a sense of foreboding, but the son of the dragon should not fear. He went to explore this fire from the sky.