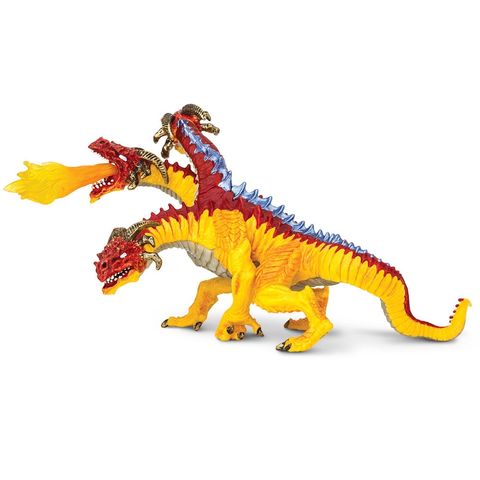 Few creatures inspire fear and respect like a full-grown fire dragon. While other dragons have powerful limbs, multiple heads, sharp horns, and fire-breathing capabilities, none combine all those attributes like the dangerous fire dragon.

The fire dragon is thought to be the offspring of a dragon king and a cave dragon. It shares the multiple heads and gift of fire with the dragon king, while its powerful body and dangerous horns appear to be passed from the cave dragon. Fire dragons have seldom been studied, though, because of their notorious tempers. Even brave knights of the Round Table avoided them, preferring to battle the more evenly matched forest and mountain dragons.

Rising from the forest floor where it rested, the massive fire dragon stretched its three necks and plodded to the shore of its otherwise uninhabited island home. Inhabitants sometimes did come, but they didn’t last long. He lowered one head at a time, scanning the forest behind and the horizon ahead with the other two, until he’d quenched the thirst of all three. Something strange appeared just then in the water. White sails, dozens of them, floating around the rocky point of his island. Perhaps they would sail on toward the mainland of Greece, but perhaps they intended to invade his home. Out of the corner of another set of eyes, he caught sight of a second, smaller fleet, farther out to sea, coming from Greece. The Greeks, he knew, were wise enough to avoid his island. But these newcomers he wasn’t sure about. He crept back inside the edge of his forest home, and as the wooden ships passed in front of his beach to close for battle, the fire dragon began to spray hot flames into the sails of the invading ships. The armada was defeated, and Greece was saved. Thus began the legend of Greek Fire.